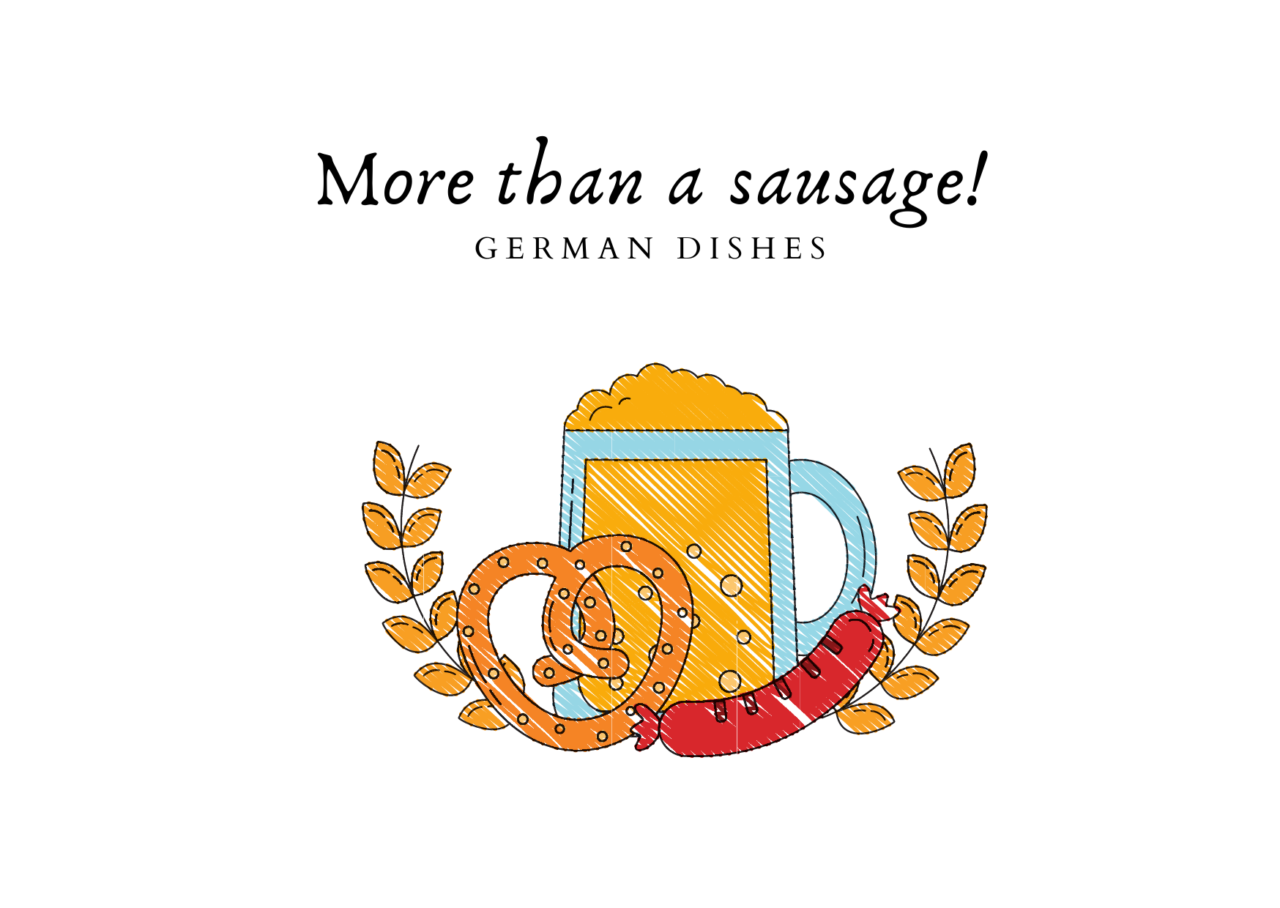 GERMAN DISHES In German cuisine, there are influences from Italy, Greece, Spain, Turkey, Poland, the Czech Republic, Slovakia and the Far East, which testifies to its diversity. In almost every corner of the country you can try a different specialty, but it is worth remembering that eating habits are not uniform. In the west of...

In German cuisine, there are influences from Italy, Greece, Spain, Turkey, Poland, the Czech Republic, Slovakia and the Far East, which testifies to its diversity. In almost every corner of the country you can try a different specialty, but it is worth remembering that eating habits are not uniform. In the west of the country, vegetables predominate in dishes, and in the south, fatty and heavy dishes are put on. Contrary to popular belief, traditional German cuisine is not just bread, potatoes, sausage and a pint of beer.

Today’s menu includes:
1. Pharisäer – heißer Kaffee mit Rum und Schlagsahne (hot coffee with rum and whipped cream)
To prepare the coffee the Pharisee needs very strong hot coffee, which additionally should be sweetened with sugar cubes. Coffee must be freshly brewed. The obligatory ingredient is also a brown rum cap and a whipped cream cap.
Pharisäer can be tasted in the northernmost district of Nordfriesland, which is located just off the border with Denmark. There is a legend associated with the creation of this drink. In the 19th century, Pastor Bleyer lived. He never drank alcohol. The clever farmers of the Johannsen family resorted to deception during the baptism of one of the children and gave the priest the aforementioned coffee. When the man discovered the deception, he was to shout “Oh, ihr Pharisäer!” or “Oh, you Pharisees!”
2. Matjesbrötchen – ein Kaiserbrötchen mit Hering, Zwiebel und Salat (cashiers with herring, onions and lettuce)
Another proposal is a very popular and easy to prepare sandwich, which can be classified as fast food. We will easily get it in the whole of the Land of Schleswig-Holstein, where we are happy to enjoy the goodness of the North and Baltic Seas. Matjesbrötchen is only one of the so-called fish rolls/fishburger, that is Fischbrötchen.
The basis of the sandwich is the wheat kajzerka and fish. Germans most often reach for herring and well known in Poland rolmopsy. There are also variants with mackerel, sprats or salmon, but also crustaceans (this variant will be known as Krabbenbrötchen). It will not do without onions, leavened cucumbers, a leaf of green lettuce or mayonnaise-based sauce (remoulade).
3. Himmel und Erde – Kartoffelpüree und Apfelmus (potato puree and apple mousse)
The last proposition is a nod to those who like unusual connections. Something for lovers of sweet and salty taste, that is, a combination of salty potato puree with sweet apple mousse, which is traditionally served with fried smoked cough, stewed onion, bacon and fried liver.
The name may come as a surprise, because in Polish it will sound “heaven and earth”. The dish has been known since the 18th century. It’s called “Erdapfel,” which we’ll literally translate as “underground apple.” In this way, some parts of Germany define potatoes. “Himmel” means apples on trees, and “Erde” potatoes growing in the soil. They know this dish in Rhineland, Westphalia, Lower Saxony, Mecklenburg, the Netherlands, and also in Poland, Silesia.